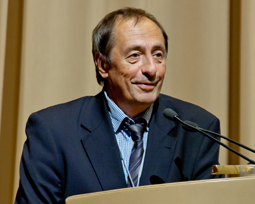 Director of IPAM USATU, Head of the Chair of Nanotechnologies at USATU, Dr. Sci. (PhD), Professor, Honoured Scientist of the Russian Federation, fellow of the European Academy of Sciences,
member of the Science Council attached to the Ministry of Science and Education of the Russian Fedration

RuslanValiev has been the founder, research coordinator and Director of the Institute of Physics of Advanced Materials at Ufa State Aviation Technical University (USATU) since 1995, and Head of the Chair of Nanotechnologies at USATU since 2005. In the early 1990’s Prof.Valiev and his co-workers pioneered the fabrication of ultrafine-grained metals and alloys through severe plastic deformation (SPD) processing.
Since 2013, he has been Head of the Laboratory for Mechanics of Advanced Bulk Nanomaterials for Innovative Engineering Applications at St. Petersburg State University (nanomat.spb.ru) established under a grant from the Government of the Russian Federation for state support of research conducted under the supervision of leading scientists (Agreement No. 14.В25.31.0017 of June 28, 2013).
At the present time, his main research interests comprise study of SPD processing for fabrication of nanomaterials, investigation of their microstructure and unique properties, development of routes for their application. Since 1992, Ruslan.Valiev has been Guest Professor in the leading research institutions in the USA, Japan and Europe. He has received two awards from the Humboldt Foundation (Germany): the Research Award in 2001 and the Re-Invitation Award in 2007, for his pioneering works on nanomaterials from SPD processing. He has acted as co-organizer of several international SPD meeting, including the NATO Advanced Research Workshop on Investigations and Applications of SPD, which was held in 19999 in Moscow and initiated the NanoSPD conference series.
RuslanValiev is one of the founders and currently the Chair of the International nanoSPD Steering Committee (www.nanospd.org) and a member of several international professional committees, including: the International Committee on Superplasticity (Orlando, USA), the Academic Comittee on New Materials (Moscow, Russia), the Academy of Sciences of the Republic of Bashkortostan (Ufa, Russia), the International Committee for Nanostructured Materials (Sendai, Japan), the Minerals, Metals and Materials Society (TMS) (USA). He has published many papers, several book and monographs, and has given numerous keynote lectures and invited talks at international conferences. Besides, Prof. Valiev is a co-author of 16 patents relating to nanomaterials from SPD processing.
RuslanValiev is the Chairman of the regular international symposium «Bulk nanostructured materials: from fundamentals to innovations» (BNM), held in Ufa, Russia, every two years (since 2007), which gathers together scientists and specialists from over 25 countries.
He has an active academic activity, heads the leading scientific school of the Russian Federation «Physics and Technology of Structural Nanostructured Metals and Alloys», consisting of his younger disciples. Under the supervision of Prof. Valiev, 47 PhD theses (37 for Cand.Sci. and 10 for Dr.Sci.) have been prepared and defended. In 2006 and 2008 the research team under his supervision was granted the title of the leading scientific school of the Russian Federation.
He holds various awards and prizes for his research activity: Diploma for Scientific Discovery in the USSR (#339, 1987); Award from the International Science Foundation (Soros) (1994); Research Award from the AvH (Germany) (2001) for pioneering studies in the area of bulk nanomaterials; Award from IAPC Nauka/Interperiodica for the best scientific publication in the area of physics of metals published in 2003; Head of a leading scientific school of the Russian Federation – supported through grants of the President of the Russian Federation in 2006 and 2008; Re-Invitation Award from the AvH (2007); certificate as the most cited author for the period of 2005-2008 issued by ELSEVIER for his paper «Principles of equal channel angular pressing as a processing tool for grain refinement”, Prog. Mater. Sci., 51, 7 (2006), pp. 881-981; First Annual Materials Science & Engineering A Journal Prize (2010) for outstanding works in the area of bulk nanostructured materials; Scopus Award Russia 2011 as «The Most Highly-Cited Internationally Russian Author»; the 2011 Blaise Pascal Medal in Materials Science for scientific achievements (European Academy of Sciences), TMS Fellow Award 2014 and others.
He is the authors of over 600 papers, 13 monographs and books, over 35 author’s certificates and patents, a scientific discovery in the UUSR (#339, 1987). The total number of his citations exceeds 26500. His value of h-index is 77 (according to ISIWoS).